IPv6 is faster than IPv4.

Nobody ever believes me when I tell them this, but the evidence is overwhelming. 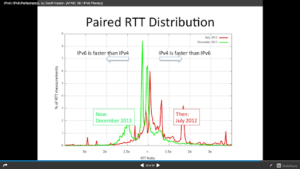 This APNIC chart shows some big spikes, but meaningfully, a significant number of IPv6 connections (the stuff to the left of center) are just a bit faster than IPv4, when measuring Round Trip Time (RTT). 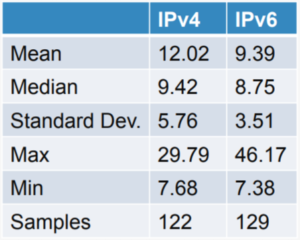 CableLabs did some lab testing, comparing IPv6 to NAT44, and found that IPv6 was faster in mean and median, though the highest sample was an outlier. They later tested against NAT444 (home gateway plus CGN) and that showed IPv4 faster, which makes even less sense.

I said, using my measurements from Time Warner Cable, at the same NANOG: 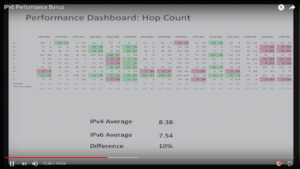 It’s hard to read, and the original has been lost in the mists of time. Each row is a popular web site. Each column is a TWC hub. In each column are two numbers representing round trip time in milliseconds from that hub to that web site: the left is IPv4 and the right is IPv6. If IPv6 is 20% faster, the cell is highlighted in green. If IPv4 is 20% faster, the cell is highlighted in pink. Most measurements were within that different (no highlight), but you can also see that some hubs saw consistently faster IPv6, and some web sites saw consistently faster IPv4. On average, IPv6 was a bit faster.

This is similar to the APNIC chart above, but with IPv6-faster on the right, and with percentage on the x-axis. There’s again a cluster around “IPv6 is just a bit faster.”

Vaibhav Bajpai and Jürgen Schönwälder in their paper  included these:

It’s an excellent paper, but the bullet points next to each chart give you the sense. The second chart shows timers relevant to Happy Eyeballs, which was used in the revision of that specification. The AT&T and Sprint charts show show the page load time from those networks to a site with end-to-end (E2E) IPv4 and IPv6, and shows that web pages available on IPv6 consistently load faster than on IPv4.

Akamai, in their blogs, has said:

We performed such an experiment looking at one specific site (URL) on one specific device (iPhone) on one network (Verizon), and we saw that the selected sites load 5% faster in median and 15% faster for the 95% percentile on IPv6 compared to IPv4. 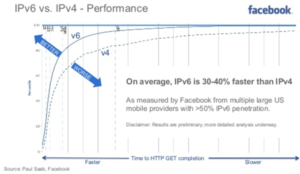 They have since backed off that representation a bit, but in late 2018 said (see about 39m0s) that the performance difference is “very significant, in some cases dramatic.”

IPv6 is now so ubiquitous at Facebook that a friend in security there recently commented, “Sometimes I forget IPv4 even exists.”

LinkedIn 2016 had several other interesting slides: 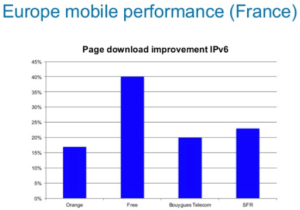 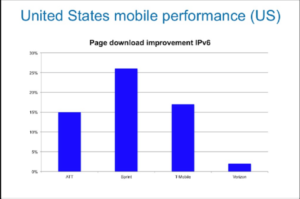 Current statistics are maintained by APNIC but here’s a recent snapshot:

To get this measurement, they subtract the IPv6 round trip time minus the IPv4 round trip time. So if the IPv6 time is lower, they’ll get a negative number. The only place IPv6 isn’t significantly faster is in Asia, and you can follow the link to see why. Or follow any of the links to drill down by country, and then by network. 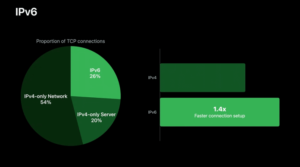 That’s a lot of different sources, over a long period of time, measuring actual Internet traffic, and finding that IPv6 is consistently, if not always, just a bit faster than IPv4. If improving performance by a few milliseconds per round trip is important, IPv6 is a straightforward way to achieve it.