The news on IPv6 is mostly good, “up and to the right.” For years, I’ve caught myself thinking, “If only So-and-So would deploy IPv6!” But who, really, would make the biggest difference to IPv6 deployment?

I decided to look at the U.S. and try to figure it out. Eric Vyncke shows us the top web sites in the U.S., and their IPv6 status. It’s U.S. top sites, so it doesn’t include domains outside the U.S. visited by people inside the U.S., or non-web traffic. I encourage people to look at this for their own countries. Eric has recently added a hover feature showing what CDN is hosting the site. Looking only at the top 50, the CDNs hosting the most IPv6-incapable domains are:

It’s not entirely up to the CDNs whether to dual-stack the domains (although CloudFlare no longer allows IPv4-only). The exception is Microsoft, who does control all four of those the IPv6-incapable domains: live.com, msn.com, bing.com, and microsoftonline.com (microsoft.com and office.com do have IPv6). Other big companies with multiple IPv4-only sites are Ebay/PayPal and Twitter/t.com.

The reader keeping sums might notice that if all 17 of those CDN domains added IPv6 support, the U.S. would double the number of U.S. Top50 domains running IPv6, to 34 domains, or 68%. Adding eBay and Twitter would get us to 76%.

Those 50 domains aren’t the only ones that matter in the U.S., though, so I grepped the page source, and the CDNs hosting the most domains without IPv6 are:

I’m sure I missed some organizations that host multiple domains, and there’s definitely a long tail of content after the top 1000. But the original question was, “Who can make the biggest difference in IPv6 deployment?” The answer for the thousand most common domains is “Amazon and Akamai,” followed by CloudFlare (who have enabled IPv6 for all but their largest customers; there isn’t much more they can do) and Fastly. Different answer than for the Top50.

I love APNIC’s measurement data, though I abuse it. The number of samples should roughly correlate to the number of subscribers an ISP (including wireless) has. It’s not a 1:1 correlation. But using it as a relative approximation, I took their samples data, and multiplied that by (100 – %IPv6-Capable) to find the very rough number of users they have left to provide IPv6 to. Then I did some eyeballing to consolidate ISPs who have multiple ASNs (like Charter, who has their own plus several TWC plus BrightHouse). In very approximate numbers, the US ISPs with the most users left without IPv6:

The last three rows break down the “all the rest.” Please don’t expect too much precision from these numbers: this is cocktail napkin math, assuming that “number of samples” is proportionately equivalent between networks (indeed, APNIC’s vpop numbers are also rough).

It may be surprising that ISPs with the largest IPv6 deployments (40-70%) can still have the largest effect on IPv6 eyeball deployment in the U.S., but it makes sense that the largest ISPs would have the most impact. Verizon has been shedding residential customers for the past several years, so 30% of Comcast is about the same as all of Verizon FiOS and DSL. Charter’s IPv6 deployment has been growing rapidly, but it may take them another year to achieve Comcast’s level of deployment. Cox is also having a great run but their total subscriber base isn’t as large.

Notice, too, that the biggest grouping is networks with 100,000 to 1,000,000 users left to renumber (excluding TWC, which is included with Charter). The largest non-deployers are Windstream, WOW, and CableOne. Networks in the 10,000 to 100,000 range are in the same ballpark as Verizon and the remainder of Comcast.

Look at it sorted by number of users, where networks of the same order of magnitude are grouped together: 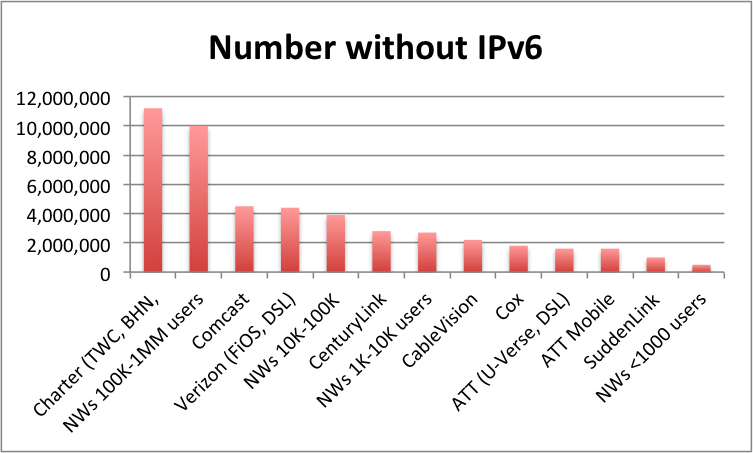 After Charter, the biggest cluster of IPv6-incapable users is among small to medium ISPs, those with hundreds of thousands of users. Next most influential are Comcast (still), Verizon, and large enterprises and institutions of ten to a hundred thousand users.

The practical upshot in all of this is that while a few large organizations (Charter, AWS, Akamai, Fastly) can have a proportionately large impact on the adoption of IPv6, after those few there is a long tail of organizations and people who will need to make a difference. Until every Network Engineering team, IT department and network administrator deploy IPv6, there will continue being a significant tail of IPv4-only content and users.